Posted on March 10, 2015 by idreamoftobermory

Forget the runways of New York!  Ignore the salons of Milan! Never mind Paris Couture!  The Limestone ladies debuted their smash-hit fashion sensation on this hike:  The Dolly Hiking Hat! (Named after our benefactor and hat creator, Dolly E.!)

We debated how best to express the true character of our group through clothing.  Matching T-shirts?  Bah!  It’s been done.  Ball caps?  Too souvenir-ish.  We wanted something as unique as our ladies, each with our own personalities, quirks and character.

And so, may we present our hats  to the world.  They represent us because NO TWO ARE THE SAME! 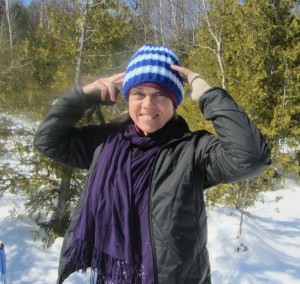 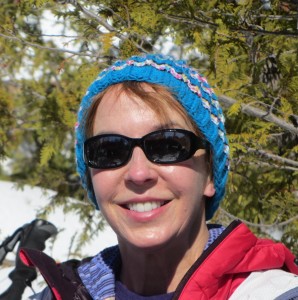 Each hat as unique as its wearer!

And speaking of no two the same – it holds true for hikes as well.  You just never know what you’ll get when you step out onto the trail.  On this particular day, starting just north of Devil’s Glen, we found….. deep, untracked snow!  It was beautiful to behold, but a b**ch to walk through.  Many times people stepped into deep, bottomless drifts and toppled over.  It was not easy to get up as there was nothing to stand on nor push against.

Here is an experienced hiker, struggling to escape the clutches of the bottomless snow.

We struggled on, taking turns breaking trail.  Being the lead hiker was slow, sweaty, exhausting work.  But, by the end of the line, there was a nice, firm, easy trail to skim along, thanks to the efforts of our trail-breakers.

This was slow going. You cannot appreciate from the picture how deep the snow was at the front of the line.

Plenty of snow in these woods! (note the hats!)

The most challenging situations were going up hills.  Stepping up into deep, loose snow would get you almost nowhere because your foot would slide back down, even in snowshoes. 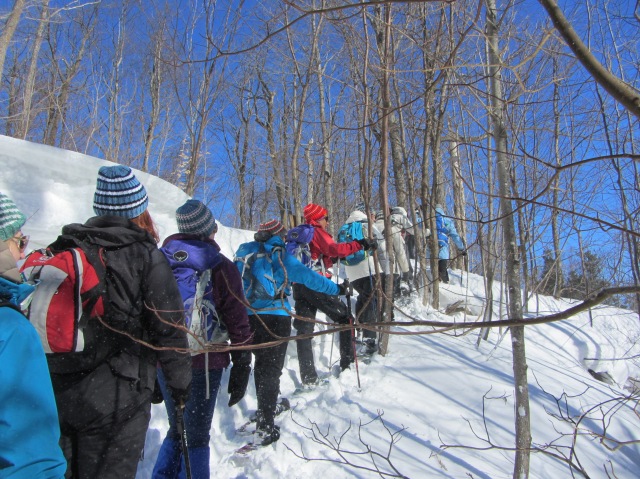 This was a particularly difficult climb due to heavy snow drifts

It soon became apparent that we were not going to be able to make our target of 16 km.  The traveling was just too slow.  Fortunately, the group is flexible and we quickly came up with a new plan.

We hiked a long section of Concession 10, past Highlands Nordic ski centre.  The wind blew fiercely along the road and we had to keep our heads down.  We also met one of our non-hiking Limestone Ladies, driving along this road.  She was headed for a ski! 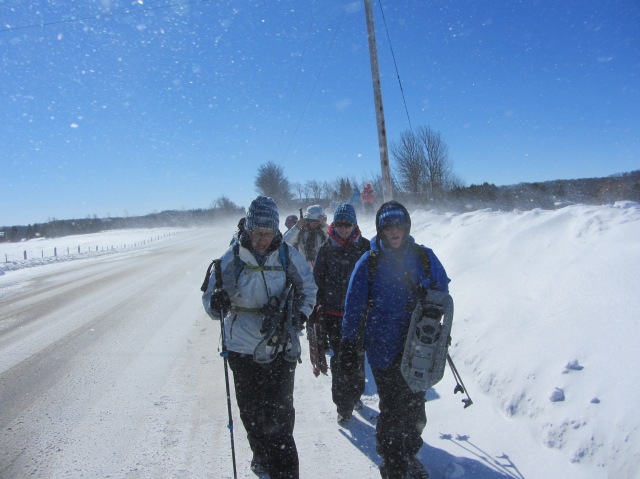 Battling the wind along Concession 10 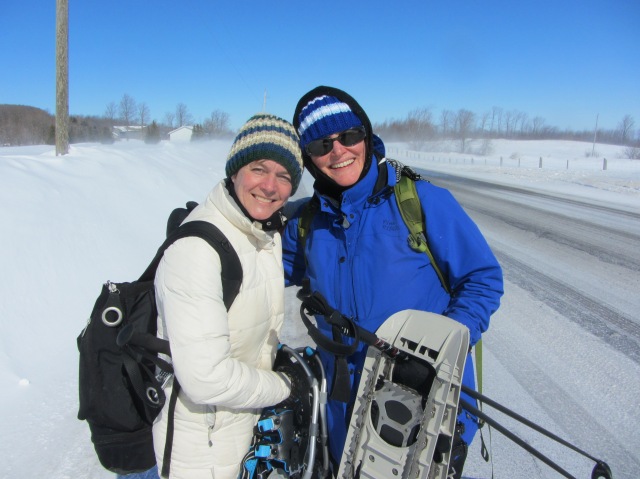 It takes more than howling winds and biking cold to defeat our ladies! They smile through it all.

We were getting very hungry, but there was one more feat to be completed before we could eat.  A very steep hill appeared and required climbing.  then we could look for a lunch spot!

Backs bent with strain, the ladies toil up the mountain pass.

Out of the wind, it was a spectacular day, and we found a secluded, warm, sunny nook for our lunch.  It was warm enough to relax and enjoy our own lunches and also the treats on offer:

Enjoying lunch in the sun!

The next section of the trail once again featured very deep snow drifts.  We encountered a few trail markers, which normally stand at about waist height.  We were walking on snow mounded above them! 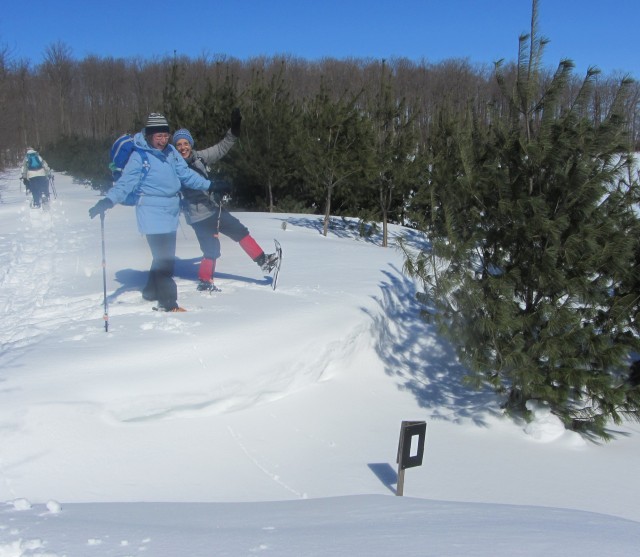 Yes, that is a trail marker poking out of the snow in front of her!

We reached an area where the trail followed the top of the escarpment, with expansive views out over Georgian Bay (frozen, of course. )  It is exciting to see the Bay, as it makes us think we may actually, some day, reach Tobermory!

Can you see Georgian Bay in the background?

Georgian Bay lies beyond the trees 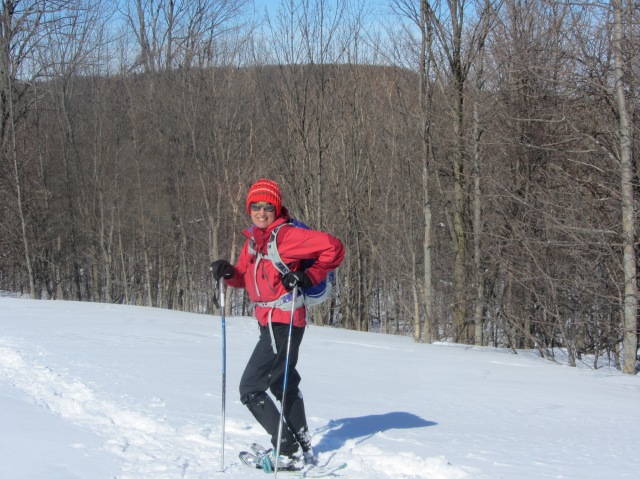 Hiking the edge of the escarpment.

The last section of the trail, before we stopped at Eagle Crescent,  was the prettiest.  Huge gnarly trees inhabit these forests, their branches laden with snow. 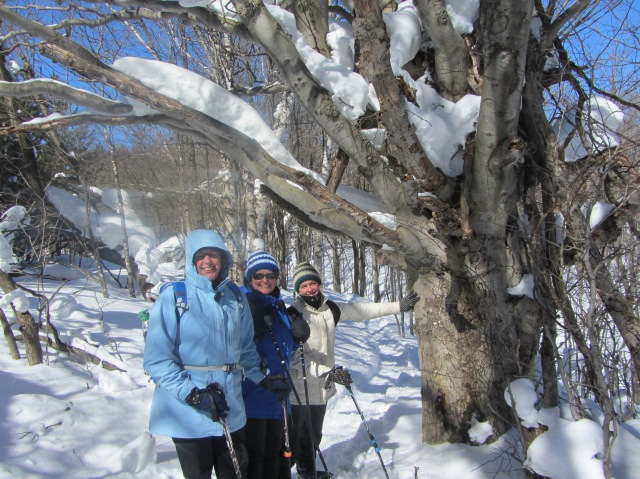 The largest pileated woodpecker hole I have ever seen. What a way to earn your dinner! 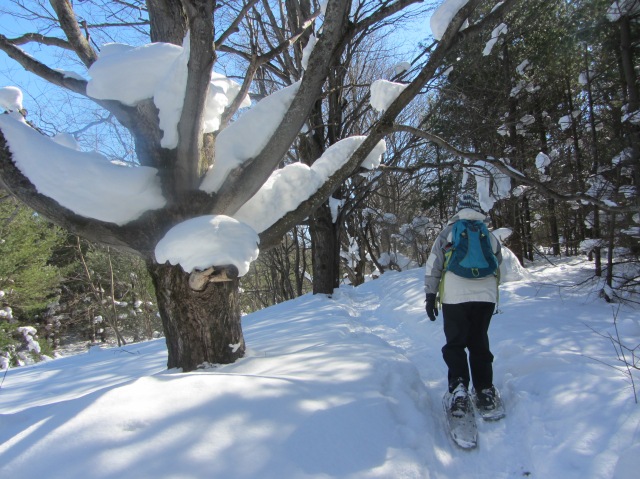 Quiet beauty of the winter-laden trees

As we reached the end of the hike, we stopped to acknowledge our warm and fashionable heads.  The era of the Dolly Hiking Hat is born!

No two the same!

We have a wise and talented friend named Dolly, who hand-knit all of our hats so we could be both warm and beautiful on the trail.    We are grateful for her generosity and her inspiring colour combinations!  If we had met anyone else  on the trail today, I’m sure they would have been jealous of our stunning headwear!

Designer and creator of the Dolly Hiking Hat: Dolly E.!