Posted on August 5, 2014 by limestonelady

Summer is in full swing and the majority of the Limestone Ladies were enjoying other adventures, quite literally around the world, across the country, paddling through the NWT, at the cottage, with families and friends. While out of sight, we were not out of mind as we received emails wishing us happy trails on July 27th.

At 9 hikers, we were the smallest group since we started. But armed with the good wishes of our missing members, we vowed to make up for the lack of numbers with pithy conversations. Since the meme “pithy” became our touchstone throughout the day, here are some of the online definitions:

: using few words in a clever and effective way

: resembling or having a lot of pith

: having substance and point

: substantial quality (as of meaning)

One of the nicest aspects of the Limestone Ladies is that during each hike we seamlessly form and re-form who we’re hiking alongside until we’ve all had the opportunity to catch up with one another. This month was no different: travels completed and trips to come, kids and grandkids, politics and world developments, cultural outings and recommendations, shopping excursions, renovations, buffalo and homemade ice cream, recipe exchanges, health and health care, the gold medal win of the world championships for women’s wheelchair basketball and our own Sheila’s contribution to their success, work, life, the wonders of the Niagara Escarpment and admiring and appreciating the tremendous work of the Bruce Trail volunteers were all covered. Of course our talk is not all pithy. There’s plenty of laughter and joking as well. But with such an incredible group of women, our conversations do reveal the qualities of “pithy” each and every hike.

Striking out confidently through our first meadow, savouring the great weather and beginning to catch up with each other, we belatedly realized that we hadn’t passed any Bruce Trail white trail blazes. While not wanting to admit we were missing Fran, our organizer par excellence, as well as Deb, our logistician, amongst other keen eyes, we had to pause to send out scouting parties to find our way. In the end we retraced our steps through the meadow to go into the woods. 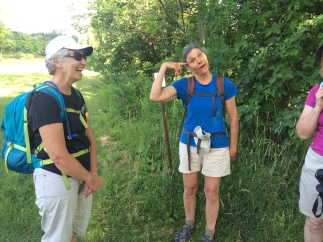 Where are those white blazes?

2.2 km into our day, we hit the 300 km mark of hiking the Bruce Trail! Luckily Fran had drawn it to our attention in her email or we might have traipsed along without taking the time to acknowledge how much we’ve accomplished and how much we’ve grown since we began on a cold, wet October day 16 months ago. Over a third of the way completed! Not satisfied to revel in the accomplishment, we duly noted there are only another 590 km to go! 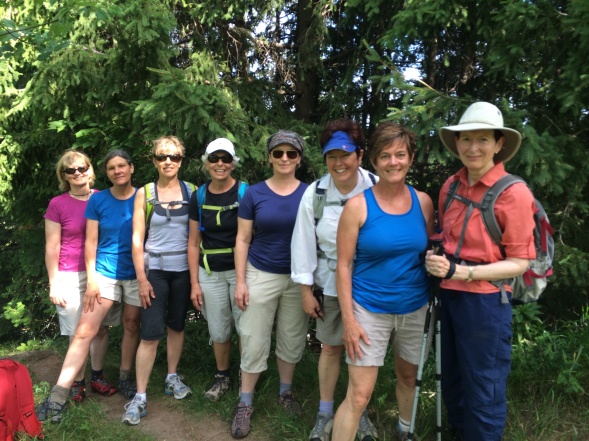 Eating up the kilometers – 300 down

Just past our 300 km milestone, we encountered a bizarre encampment of new split rail fences with ramshackle “buildings” guarded by 2 snarling, lunging dogs. Picking up our pace, we scrambled down the path to not have to test if the dogs really were confined.

What’s your guess? No easy answers to what this is.

Luckily we don’t run across many out-of-place intrusions into the general sense of well-being and rejuvenation we experience on the Bruce Trail. Much of our hike went through serene woodlands, with lung-filling oxygenated fresh air, rustling leaves and gently flowing rivers. 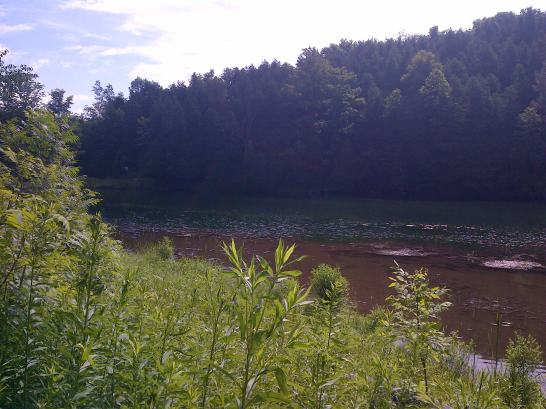 Our hike began on undulating paths through the forest and alongside rehabilitated gravel pits transformed into meadows full of grasses, wildflowers and milkweed. The Bruce Trail Conservancy has been instrumental in preserving the rich and unique natural diversity of the Niagara Escarpment. Milkweed is one example. Clearing of ever more land is destroying the one food used by monarch butterflies, contributing to their dramatic decline. Happily, we encountered lots of flowering milkweed. 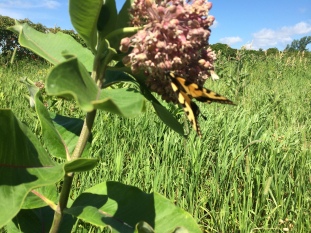 While we didn’t see any monarchs, we did learn that milkweed fluff was used by First Nations for diapers and feminine hygiene products. Very versatile plants, different parts of the milkweed were used to remove warts, cure dysentery, suppress coughs and treat typhus fever and asthma. The fibers were twisted into cordage or coarse fabric. The fluff was also used as tinder and to stuff mattresses and pillows. During World War II, the regular material used to stuff life jackets was in short supply, so milkweed floss was used as a substitute—it is about six times more buoyant than cork! (All additional facts from the Farmer’s Almanac). One of the treasures of the Bruce Trail is that it enables natural diversity, traditional knowledge, modern uses and potential advances to be experienced and explored.

Overlooking the headwaters of the Humber River

Upon reaching the Humber Heights Lookout at the headwaters of the Humber river system, we called an early lunch. With a stunning vista, shade and a light breeze it was the perfect spot. Thankfully, the day was not as hot and humid as June’s hike. Nevertheless we were warm, and being true to the Ladies of our name, “glowing”, otherwise known as soaking wet with perspiration. Tales of buffalo milk and homemade ice cream only went so far to cool us down. Ever resourceful, Sheila took the ice pak from her lunch and brought our temperatures down to manageable levels by rubbing it against our necks.

Having set ourselves up by describing the terrain as “undulating”, we soon began a series of steep climbs and descents. We’d been spoiled the last few months in not having to scramble up and down the escarpment quite as often as in the beginning. Of course, we all thought the hikes were easier because we were in better shape. Maybe not as much as we’d have liked!

As the hike continued, there were a few muttered appeals half way up that this be the last ascent. On one particularly long, steep, never-ending climb, the front”runners” stopped to give the others a chance to catch up (at least that’s how they characterized the break). Once more, Sheila’s magical ice pak helped cool us down and refreshed us enough to scale the crest of that particular hill.

Cool as a cucumber

While a bit tougher than recent hikes, the joy of hiking the Bruce Trail outdoes everything else. Our reward for scaling yet another section of the escarpment was a light, refreshing breeze. Alongside the meadows were mowed grassy trails, making for easy walking and a return to pithy conversations. The mature, mixed and shady hardwood forests were a delight to traverse. Man-made pine and spruce plantations were interspersed with debris and fallen trees from the tornado of 1985. We crossed the intersection of the Bruce Trail with the Oak Ridges Trail, thanking the foresightedness of those who have preserved so many of these natural areas.

Intersection of the Bruce Trail with the Oak Ridges Trail

Unlike most of our hikes, to reach our end point we descended a series of switchbacks, deep drops and uneven pathways. For a long ways.

Normally this would have been greeted with great sighs of relief since, as noted, we have often faced a steep climb to end our day. But we were using a side trail to reach our cars and were acutely conscious that this same descent would be converted to a heart pounding scramble up to reconnect with the Bruce Trail proper as our starting point in August!

However, true to form, every hike we also encounter the delightfully unexpected. And July’s was no exception. We discovered a wood nymph emerging from the pith of a fallen tree. Wikipedia defines it thus: “Nymphs are personifications of the creative and fostering activities of nature”. As is hiking the Bruce Trail. Only 577.2 km to go!

This entry was posted in Uncategorized. Bookmark the permalink.

2 Responses to July 27, 2014: Of Pithy Conversations and Undulating Paths