Posted on April 28, 2014 by idreamoftobermory

At last!  After some truly challenging hikes (think: blizzards, knee-deep snow, treacherous ice), spring hiking is back!  The Limestone Ladies were so excited about the prospect of spring that our hearts turned to: Paris!

We set out from Third Line on a cold gray morning.  However, our hearts were filled with such joie de vivre that we didn’t let the cool dampness get us down.

Straight off the plane from Paris! 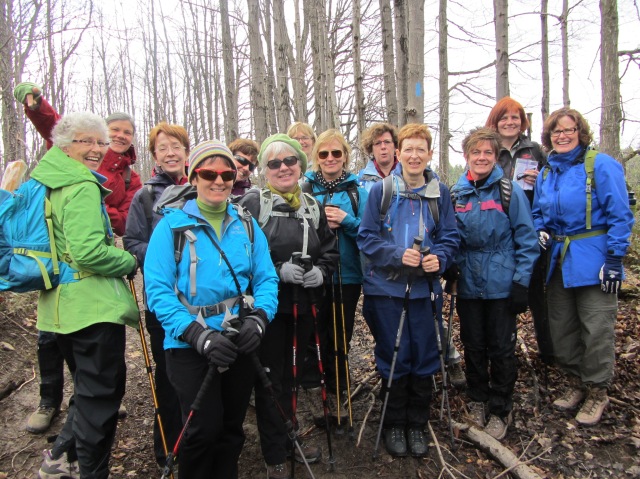 Les Femmes du Limestone setting off into the woods.

A true Parisian never goes anywhere without her baguette

This was the first hike where we have ever had difficulty finding the trail.   There were so many fallen trees and so much debris from the ice storm that often the trail was lost beneath the chaos of branches. 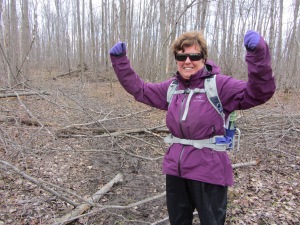 A hiker who is extremely excited about spring, or mud, or Paris, or something!

One cool detail that is visible now that the snow  is gone is the incredible numbers of fossils in the rocks.  When you stop to think about it, we are walking on the bottom of an ancient sea bed and these are the remains of creatures who made their homes here long before trail hiking became a hobby!

There are 6 fossils in this one little portion of rock.

If anyone knows what this fossil is, can they please let me know?

There were many ponds by the trailside. We were not tempted to swim!

We found a fresh French Camembert sitting on a tree stump and stopped for a petit snack.  We were in for a special surprise treat.  Les Oiseaux de Woolwich  gave an exclusive Bruce Trail performance of their smash hit “I Love Paris in the Springtime.”  Of course we all remember this song from when it was  #13 on the hit parade in 1953!

I should mention that we have one hiker in our group who is a keen geo-cacher.  She travels twice as many Km as the rest of us, as she scours the hills and gullies searching for caches.  Today’s hike was particularly rewarding: she found a geo-coin!

Here she is clambering after the treasure

Soon we drew near to the famed Hole in the Wall which we had to avoid last hike due to woman-eating ice.  Today it was not treacherous, just fun! 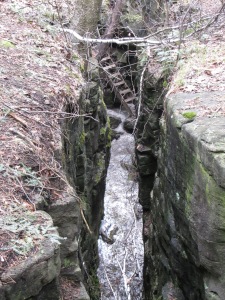 First hiker to bravely descend into the abyss

She disappeared into that crack and was never seen again. 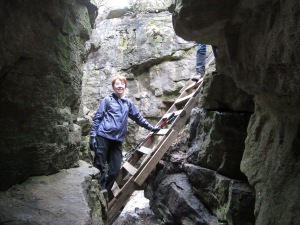 There’s nothing like a cool, dank cave to take a day from good to great! 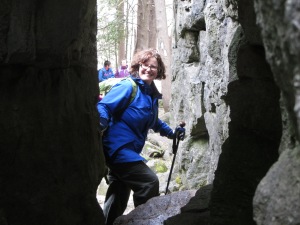 Emerging from a dark tunnel into the light – what an archetype!

Apparently we didn’t realize the danger we were in until after we passed through the Crevice of Imminent Doom.  We came upon this sign, strategically placed 6 feet above eye level where no one can see it, informing us that we should have watched out for our children.  Did any one of us know where our children were at that moment?

The children did not get watched!

The next point of interest was Limehouse and the remnants of the lime producing industry that flourished there in the 1800s.  It’s fascinating to realize that a whole industry which once created a thriving community, has vanished.  Jobs that no longer exist: lime-kiln stoker!

For those who would like more information on the manufacture of lime and how the kilns actually worked, here is a short, interesting article which will answer all your questions:  http://www.limehousekilns.ca/images/Out%20of%20the%20Limelight.pdf    As we walked along, we were pondering the oddity of burning rocks and wondering who came up with the idea.  FYI, this article states that the ancient Egyptians and Babylonians burned limestone and then ground it & mixed it with water to make mortar.  So, the concept has been around a long time! 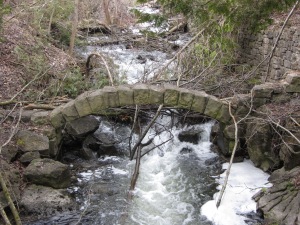 Black Creek at the lime kilns

Next up was lunch.  Thanks to the ice storm, there is no shortage of fallen trees to sit on!

The Parisian treats continued to flow.  We were treated to fresh macarons in a rainbow of mouth-watering colours.

Not your ordinary trail snacks!

And there’s always one high-maintenance femme in the group who can’t continue without touching up her Nina Ricci!

She smells good but is completely annoying in every other way!

Wafting in a cloud of L’Air du Temps, we continued through a section remarkable for extensive boardwalks through a large cedar swamp.  We appreciated the effort of the boardwalk builders who kept our feet (in their Parisian pumps) dry.

All too soon we were at Scotsdale Farm and the end of the hike.